Widely held Vulcan philosophy and beliefs require Vulcans to attain a state of mental order and tranquility. It is a lifelong goal of most Vulcans to reach this state. To do so, they use the techniques of T’san s’at (ST: VOY “Alter Ego). T’san s’at is the intellectual deconstruction of emotions and the effects of emotions on one’s actions. The process of T’san s’at can involve years of meditation, study and struggle. In attaining a goal, it is often helpful to have a physical symbol to remind one of the journey they are on.

As in most cultures, Vulcan religion and philosophy have many important symbols with diverse histories and meanings. No single symbol means the same thing to every Vulcan. However, there is a series of three symbols which appear with great consistency and across many different professional boundaries in Vulcan society. These are called Rata, Tafar and Tapan.

Usually, these symbols are worn on the chest in a vertical column. Their meanings, translated into English, are Concept (Rata), Discipline (Tafar) and Process (Tapan). According to some, a poetic form may be associated to the unity of these symbols: “Branches entwined form the tree” (http://startrekpropcollector.com/trekauctions/items/4184). This would suggest that on their own, these symbols are but pieces of a larger whole and thus incomplete unless presented together.

The concept of unity in Vulcan symbology is not unique to this Trinity. It can also be found in the Kol-Ut-Shan or IDIC (ST: VOY “Gravity”). IDIC is an acronym which stands for Infinite Diversity in Infinite Combinations. The symbol which represents IDIC consists of an organic sphere which is pierced by a triangular shape. At the intersection of the two shapes there is a beautiful gem. This suggests that when two or more diverse objects, ideals or persons come together something unique and beautiful can be created.

The IDIC symbol was used as early as the 4th century CE when it appeared on Surak’s katric ark (ST: ENT “The Forge”). In that incarnation, the triangular portion was directly vertical where most later examples of the symbol have the triangular portion at an angle. To some, this has suggested a secondary meaning of the symbol as representative of Mount Seleya piercing the Vulcan sun. However, as the IDIC symbol is most often found on objects or as decoration on walls it has little bearing on our discussion of symbols and clothing. The IDIC has also taken the form of a medal and has sometimes been used as an award of merit. In these cases it is worn on the body but it has never been seen worked into the original design of clothing.

Let us return to the Trinity of Rata, Tafar and Tapan. These symbols were in use as part of Vulcan clothing as early as April 5, 2063 when the Vulcan ship T’plana-Hath landed on Earth and Vulcans made “first contact” with Humans (ST: First Contact).

In these examples from 2063, the symbols are rendered in what has come to be called Vulcan calligraphy. All the later examples below are rendered in Vulcan print script.  The symbols were in heavy use on clothing from 2151 through 2161 (ST: ENT “Broken Bow” through “These are the Voyages”). 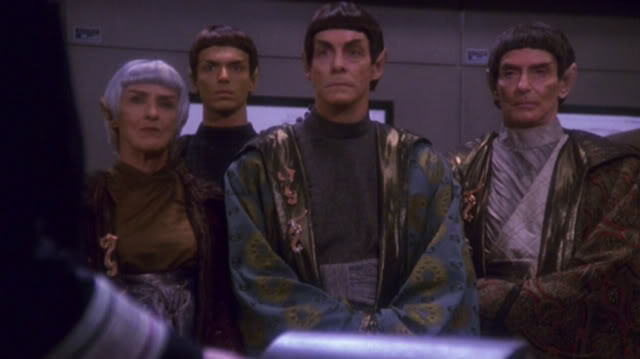 A careful examination of the images from 2063 and 2151 will reveal that it is not only the Trinity which remained in fashion during that time. The clothing worn by the commanding officer of the T’plana-Hath is nearly identical to that worn by the Vulcan to the far right in the 2151 image.
In 2272, Spock wore the Trinity as part of his robe when he re-joined the crew of the Starfleet vessel Enterprise (ST: The Motion Picture).

After his death in 2285, Spock was buried in this same robe (ST: The Search for Spock).

Heretofore, the individuals whom we have seen wearing these symbols have mostly been politicians: world leaders, government officials and ambassadors. A notable exception is a Dr. Strom who was seen wearing the Trinity in 2152 (ST: ENT “Stigma”). It should be noted, however, that though Strom was a medical doctor he was working for the government. At this time in his life, Spock was not a political man. However, we know that in the 2270s, Spock was attempting to attain Kolinahr. More than simply a suppression of emotions as in the T’san s’at, Kolinahr represents an actual purging of emotions; the attaining of a state where one no longer feels at all. Though Spock did not attain Kolinahr it seems likely that the concept was still important to him. We can speculate that wearing the Trinity was a reminder to him of what he hoped to attain.
When we next see the Trinity being worn it is in 2369 by Ambassador Lojal on his visit to space station Deep Space Nine (ST: DS9 “The Forsaken”). 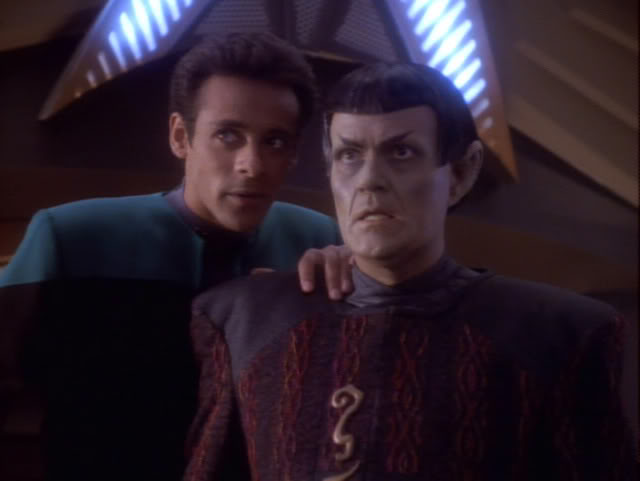 Also in 2369, we can see the Trinity being worn by Dr. T’Pan and her husband Dr. Christopher when they visited the Starfleet vessel USS Enterprise-D (ST: TNG “Suspicions”). 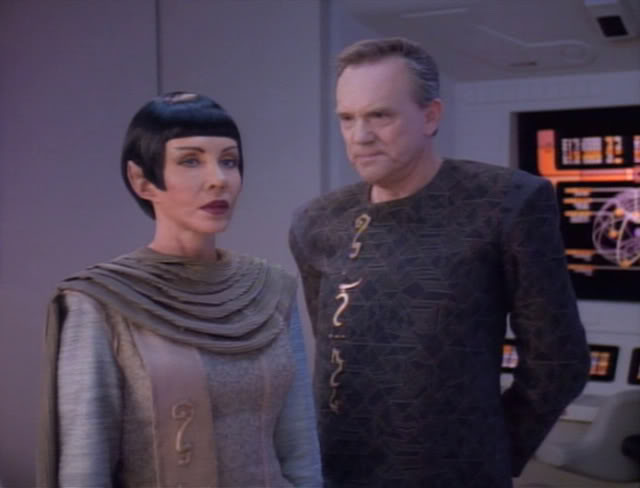 Clearly, by 2369 the Trinity is being worn by persons in all segments of society. Indeed, it may be possible that this was always the case and we simply have not recorded it. Regardless, it can be said with some certainty that these three symbols are important elements of Vulcan culture. Anything that is important enough to wear upon one’s person must have great personal or cultural significance. That significance need not necessarily be the same for every individual. In every culture there are religious and philosophical symbols which are worn by many individuals; both lay persons and officials. To each person, they likely mean something slightly different but equally important.
This essay is to be followed by a second part which will focus more specifically on Vulcan religious symbols as they are integrated into clothing with specific emphasis on the religion surrounding Mount Seleya.
AUTHOR’S NOTE:
Very little of this essay can be considered accurate to Star Trek’s “canon.” The symbols I have referred to as the Trinity have never been discussed on-screen. My information regarding them comes from continuity photos as discussed in auction listings written by the folks at It’s A Wrap! Since the information on these continuity photos was written by the actual Star Trek wardrobe department I have taken it as gospel but nothing that has not been discussed on screen is written in stone. Any errors are mine alone. Special thanks to everyone at The Star Trek Auction Listings Archive.
It’s A Wrap! Connections:

Ambassador Lojal’s costume from ST: DS9 “The Forsaken” was sold in an IAW auction on eBay as lot #2204

Dr. Christopher’s costume from ST: TNG “Suspicions” was sold in an IAW auction on eBay as part of lot #5820