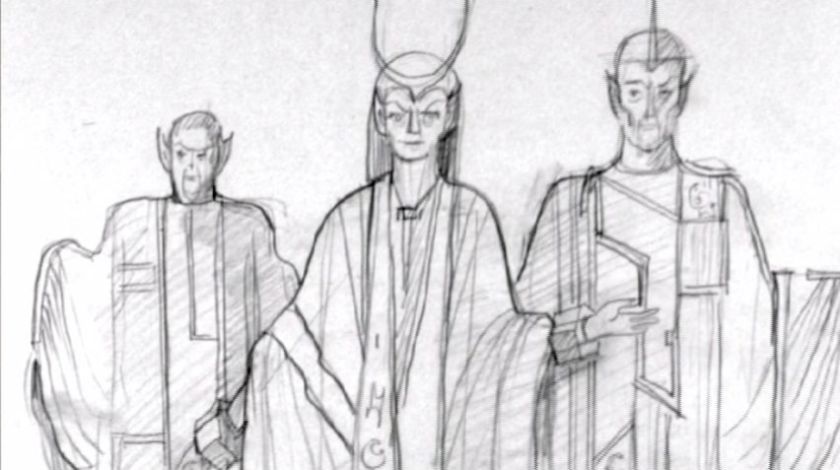 Three-time Tony Award nominee Robert Fletcher was the costume designer for the first four Star Trek feature films.  His designs would be used or referenced in almost every subsequent Star Trek production.  More than a costume designer, Gene Roddenberry gave Fletcher the task of developing overall looks for the entire Klingon and Vulcan cultures.  It was Fletcher who first sketched the ridged forehead for Klingons.  Fletcher also designed the Vulcan symbols which would adorn their costumes and form the basis for the Vulcan writing seen in later Star Trek series and films.

Fletcher began his career as a costume designer on Broadway where he created noted costumes for How To Succeed in Business Without Really Trying and Hadrian VII.  He also designed for ballet and other theatre productions before going on to work in television, designing for specials featuring Dean Martin, Bing Crosby and Mary Martin.  After a more than 30 year career as a costume designer, Star Trek: The Motion Picture was his first feature film, and his first foray into science fiction.

For TMP, Fletcher designed several Vulcan costumes.  He created costumes for Vulcan extras that were seen at the San Francisco tram station.  For these costumes, Fletcher used metallic fabrics that he worked into unique designs with many strong vertical lines and interesting geometric patterns.  These seem to be a logical evolution from William Ware Theiss’ Vulcan designs for “Amok Time.”

Also for TMP, Fletcher had to create three costumes for the Vulcan masters who presided over Spock’s Kolinahr ceremony.  Some of Fletcher’s original sketches for these costumes have survived.

Elements of the female master’s costume would be re-used in Star Trek IV: The Voyage Home, where they were worn by Spock’s mother, Amanda Grayson.  The Vulcan masters’ tabards were sold at the Christie’s Star Trek auction for $4000 and $4500.  The metallic under robes were later sold by It’s A Wrap for a combined total of over $3000.

Finally, Fletcher had to design costumes for the number one Vulcan himself, Mr. Spock.  First was the design for Spock’s Kolinahr robes.  This is an austere costume featuring an under robe with large bell sleeves; a motif that would be repeated in Vulcan costumes for Star Trek III: The Search for Spock and Star Trek IV.

The real crowning achievement for Vulcan design in TMP was Spock’s black velvet “At-Home” costume.  This is a beautiful costume put to great use in the film for Spock’s triumphant return to the USS Enterprise.  This costume also marks the first time we are clearly able to see Vulcan symbols on clothing.  Fletcher was interviewed by Nick Ottens for Forgotten Trek in 2006 and had this to say about those symbols:

“People always ask me what the writing on front of Spock’s black velvet, at-home costume symbolize. I have to explain the language that I invented to decorate those things, and I can’t! All I can say is that it’s very akin to Chinese; it’s non-syllabic, and the various shapes contain an entire thought and you don’t use them to make words.”

Fans would have to wait until 2007 to discover more about the meaning of those symbols.  It’s A Wrap! auctioned a Vulcan costume and included in the description the translations for those three symbols (rata (concept), tafar (discipline), tapan (process)).  The sentiments make perfect sense considering Spock’s study of Kolinahr at the time.  Those same three symbols which I have referred to elsewhere as “The Trinity” appear on Vulcan clothing throughout the subsequent Star Trek series.

Fletcher would next have the opportunity to design for Vulcans in Star Trek III when he had to create an army of costumes for Vulcan extras.  Each of these costumes for priests and priestesses is a work of art.  Fletcher continued to evolve his TMP designs with the strong vertical lines and geometric shapes.  The large bell sleeves became a staple of Vulcan design that would be carried forward into Star Trek: The Next Generation.  To save time on hair and make-up, the production team decided to outfit most Vulcans with ceremonial hats.  Each hat featured a cast resign “jewel” with a painted Vulcan symbol on it.  Considering none of these costumes were greatly visible on-screen, the costume department did an incredible amount of work on them.  This photo is of several of the Vulcan hats in my collection.

Fletcher worked with Maggie Schpak to design the amazing jewelry and armour worn by Sarek and the guards at Spock’s Fal-tor-pan ceremony.  The beauty and rarity of these pieces have made them highly sought after by collectors.

In Star Trek III, Fletcher also had the opportunity to design some incredible costumes for Vulcan high priests and priestesses as well as the memorable gong player.

A great source for some photos of Fletcher’s lesser-seen costumes is the Star Trek: The Motion Picture Make-Your-Own Costume Book by Lynn Edelman Schnurnberger.  This book also features a preface by Fletcher.  More information and images of Fletcher’s work can be seen online at Forgotten Trek.