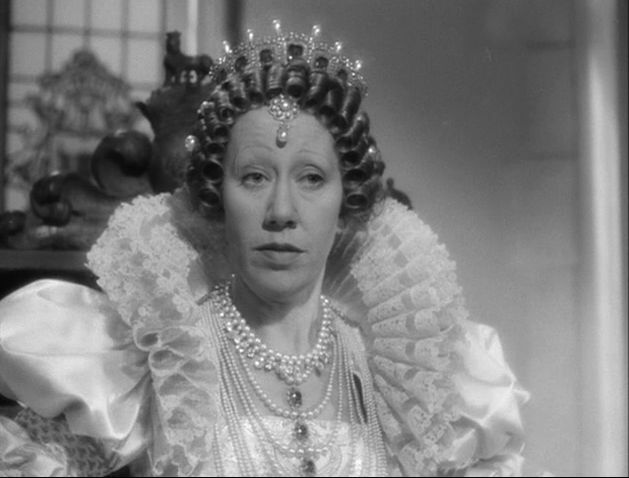 The Sea Hawk is a wonderful Michael Curtiz film from 1940.  It stars Errol Flynn as Captain Geoffrey Thorpe and Flora Robson as Queen Elizabeth I.  This was the tenth collaboration between Curtiz and Flynn who seemed to be box office magic for Warner Bros.  The Sea Hawk is a 1915 novel by Rafael Sabatini.  It had previously been adapted for a silent film in 1924.  While Curtiz’s film was originally to have been faithful to the novel, the story was eventually completely changed.  It became a film inspired by the life of Sir Francis Drake.

The story takes place in the year or so leading up to the attack of the Spanish Armada in 1588.  This would place Elizabeth I in her mid 50s but Robson was only 38 years old.  The difference is only one of many historical inaccuracies that do not affect the overall quality of the film.

This is actually the second time Robson played Elizabeth.  She first played the role in Fire Over England (1937) to great acclaim.  In 1934, Robson had played another monarch, Empress Elisabeth in The Rise of Catherine the Great.

Robson began her acting career in the theatre.  She played roles like Lady Macbeth both at the Old Vic and on Broadway.  In 1960, Robson was created Dame of the Order of the British Empire for her contributions and services to drama.

While there is sometimes a tendency for actors to play monarchs very stiffly and emotionless, Robson brings life to Elizabeth I by allowing her a sense of humour. She reassures us that Elizabeth is a human and a woman.  She uses sarcasm and flirts with Thorpe but never lets us forget that she is the ruler of England and is not to be questioned.

Not only is her character a commander but Robson manages to take command over the entire film.  As wonderful as Flynn is, Robson steals every scene she is in.  She is quite captivating–not unlike how Elizabeth I is said to have been.

Robson is presented in fabulous Elizabethan gowns and jewellery designed by Orry-Kelly.  Kelly designed the wardrobe for over 290 films from 1932 through 1963.

At the end of the film, Elizabeth gives a rousing speech to prepare her country for an attack by the Spanish Armada.  She tells her countrymen that the world cannot belong to any one man and that it is the duty of all free men to defend liberty.  This is no doubt meant to have a double meaning as England was already struggling through WWI at the time and the Allies were fighting for liberty from one man: Hitler.

Dame Flora Robson had a long and varied career that only ended with her premature death from cancer in 1984.  I cannot help but notice that she shares a strong resemblance with Helen Mirren (who would play Elizabeth I some 65 years later in an HBO mini series).