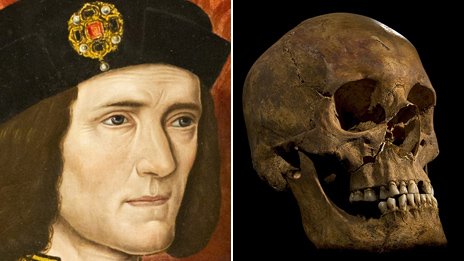 The DNA of a Canadian woman named Joy Ibsen has helped to identify the skeletal remains discovered in a car park in England as those of Richard III.  A British genealogical researcher named John Ashdown-Hill managed to trace DNA for 15 generations from Richard’s sister Anne of York to the Ibsens in Canada.

Richard was killed in battle in 1485 and was interred beneath the church of Greyfriars in Leicester.  The church was destroyed during the Reformation in the 16th century and its location was eventually forgotten. Last autumn, archaeologists narrowed their search down to a car park which was the only large open space in the area.  There, they discovered a hurriedly interred skeleton.  The deceased had suffered ten injuries, two of which were potentially fatal skull injuries.

Richard’s face has been reconstructed and it displays features very similar to portraits of the monarch painted through the ages.  In the photo with the reconstruction is Joy Ibsen’s son, Michael, whose DNA helped establish Richard’s identity.

The body will be re-interred under the auspices of the Richard III Society.